Got a problem mate? Not if you're a student at the small Bayside Secondary College.

Three years ago, year 10 students at the Altona North campus began an Innovative peer mediation program. In which students mediate and resolve minor conflicts between pupils. Last week a group of six Bayside year l0's became Victorian champions in a peer-mediation contest, the School Conflict Resolution and Mediation competition (SCRAM), conducted by the Law Institute Or Australia. Notwithstanding the thrill of representing Victoria in the national final this month against schools from New South Wales and Queensland, the students are just as excited at beating some of the states most exclusive and expensive private schools. "That was the best thing," said one of the mediators, 16-year-old paul Jessop. The principle of peer mediation Is to have minor problems, such as name-calling, resolved with the help of students trained in the mediation process. 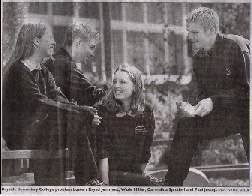 "I would like to endorse strongly Fred's work as a mediator and as a trainer of peer mediators."

"Fred has been well prepared and professional in his presentations and is able to easily engage students and staff, pitching his work appropriately to different audiences. He is impressive in mediation sessions and has given the highest quality service to our school."
Jane Redfern (Student Welfare - Craigieburn Secondary College)
teacher for 18 years

"Feedback from staff and students indicates unanimously high levels of satisfaction. The students and staff were particularly impressed by your level of skill and knowledge in the area of conflict resolution."
Biserka Andrzejewski (Student Welfare - Gladstone Park Secondary College)

Basic Philosophy of the Program

The curriculum for the manual is based on the value and belief that conflict can be positive, because it signals the need for change and offers an opportunity for us to learn about ourselves and other people. Encouragement is offered for direct and peaceful expression of conflict where there is a strong belief that resolutions are best reached voluntarily by the disputants in conflict with the help of neutral third parties.

Aims of the Program

Some Specific Reasons For Peer Mediation

The program offers an intensive two full day program (minimum) that will show students how to structure a mediation hearing, improve communication and problem solving skills, fact-gathering techniques, note-taking and questioning skills, how to identify and prioritize issues in a dispute and how to write up a mediation agreement. Role playing exercises are used to help participants analyse their own responses to conflict, understand and express their own feelings and to hone the mediation skills and techniques learned in the training.

What Is The School Commitment To The Mediation Program?

This has always been a critical question asked of the peer mediation programs. Like any new program introduced into a school, at the end of the day, there needs to be someone responsible for co-ordination. Generally this tends to be left with the Student Welfare Co-ordinator.

"Peer mediation programs have never failed in a school due to lack of enthusiasm by students".

Failure for the program to take off is generally associated with two Major areas:

Clearly these are not issues that teachers should have to spend many hours trying to sort out. If schools look at issues that require a critical intervention such as a physical or sexual assault, theft or alcohol/drug issues, this would represent about 5% or less of conflict issues brought to their attention.

Once a peer mediation program has been completed, students will often perform a mock role play for all staff, school council etc to demonstrate what a mediation looks like.

Running a peer mediation program requires a commitment to ensuring that the program is not put on the back burner. I tend to suggest that schools target for at least one mediation on a weekly basis.

Students Selected For The Program

Schools are encouraged to participate in the selection of students for the peer mediation program. Schools are asked to limit numbers for the program to between 12-20. Strategies employed by schools for student selection include;

In looking at the time-frame for the presentation of the peer mediation program, I have been fortunate in being able to observe a variety of times. Some schools chose December when the workload for various year groups is at a minimum. Other schools chose late February, early March to give students a short time to settle into the new school year but not to interfere with the student's workload which was perceived as manageable at the commencement of the school year. Some schools which are not choosing either the start or end of a year will run a program at the end of commencement of a new term.

When choosing days, it is important that there are not substantial gaps. I tend to suggest either running two days together in the one week. A number of schools also opt for one day each week over a two week period.

Running this program over several weeks from experience does not work as students tend to lose their skills and there is a greater possibility that some may be 'absent due to illness etc.

Some Practice Issues In Primary Schools

In primary schools, this program is generally carried out in the school playground during lunch break (and depending on time other play breaks may be considered).

Some Practice Issues In Secondary Schools

Important to identify a space that is regularly available for students to conduct mediation sessions in. Make up a box that the mediators can have access to. Included would be laminated copies of the mediator check sheets, paper & pens, blank agreement forms, box of tissues, white board markers or chalk, plastic jug and glasses (for water), laminated copy of what constitutes "illegal" activities that students can not keep confidential e.g. assaults, graffiti, vandalism, theft, drugs/alcohol etc,

Make up slips for students who have to return to class. Who will sign these? i.e. mediators give student a slip immediately following session.